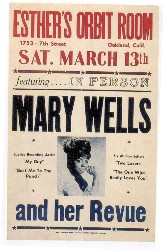 “As long as you knew your place, Seventh Street could be the place where all the action was. In addition to the music, there were pool halls, gambling halls, and places to eat southern-style foods like Sylvester Sims’s Overland Cafeat 1719 Seventh Street. “No fancy French names for our dishes,” an advertisement assured. “We serve well-cooked home dishes from mustard greens to chicken dumplings, with corn bread and hot biscuits. Just like mother used to fix it,” was the enticement for patrons who liked “down-home” food—now known as soul food (Oakland Independent 19 October? 1929:8).

Here you meet the visitor from New York, the breezy Chicagoan, the Cosmopolitan from all points South, East, and west…. A home for the visiting railroad man; a recreation place for the home patron…. A friendly place where you meet visitors from all over the world [Oakland Independent 19 October 1929:7].

Just next door, Charles E. “Raincoat” Jones, operated a business in 1942 selling clothes, jewelry, radios, trunks, and suitcases at 1734 Seventh Street (New Age Publishing Company 1942-43). On the backside of Jenkins’s Corner (Slim Jenkins’s club), Jones operated another business. A barker would holler to passersby: “Action in the back, action in the alley; big craps game”; there “Suitcase” Brown might be presiding over a crap game. The police were allegedly paid to look the other way at these activities. Jones’s operations may have been on the illegitimate side, but he is remembered as a good businessman who kept his enterprises going for years.

While West Oakland was indeed a multi-ethnic neighborhood, Seventh Street and its surrounding area were a haven for Black folks. After the demise of the bohemian Barbary Coast jazz scene in San Francisco in 1921, a number of dancehalls, theaters, and cafes sprang up in West Oakland. The non-Black community in West Oakland in the *20s and ’30s—before the “White flight” of the ’40s—stayed to themselves and had little to do with African American social life. Some Whites patronized Black and Tan clubs—nightclubs that catered to a mixed clientele—although many perceived themselves as “slumming.” Among West Oakland’s most popular Black and Tan clubs were Slim Jenkins’s club (1933-1962) and The Creole Cafe (ca. 1918-1921), both on Seventh Street, but even here the majority of the patrons were African Americans. The phrase had a cosmopolitan tone, and many bands incorporated it into their names, such as Clem Raymond’s Black and Tans, ‘”Black and Tan’ in a band’s title was a selling point—a positive,” as Oakland musician Earl Watkins (1995, pers. comm.) pointed out.

In addition to live music, recorded jazz could be heard in the homes and businesses of West Oakland. Several accounts confirm the reported Pullman porters” role in distributing records from Chicago before they were available in West Coast stores. In 1926,just six years after Mamie Smith’s historic recordings on the Okeh label, jazz records were advertised for sale at the Center Pharmacy, located on Seventh and Peralta streets. Here, |West Oakland residents could purchase records by the latest female blues singers of the ’20s: “Latest Blues,” the pharmacy advertised, “Blues to soothe the aching heart.” The listing of available titles (along with the record’s matrix numbers) included such artists as Bessie Smith, Clara Smith and her Jazz Band, Ethel Waters, Maggie Jones, the Charleston Dixie Washboard Band, Rosa Henderson, and the Harmony Hounds (Western American 30 July 1926:3). By 1930 the West Oakland Music Company, at 1506-A Seventh Street near Chester, sold radios, phonographs, records, and “quality merchandise” (Thompson and Williams 1930:17). The Okay Phonograph Company advertised in local Black newspapers. One such advertisement, for Louis Armstrong’s “St. James Infirmary” and “Save it Pretty Mamma” at a price of 75 cents, pictured a cartoon of a dapper man in blackface with a cane next to Okeh’s logo (Oakland Independent 15 March 1930:4).

While Seventh Street saw the emergence of a bustling nightlife in the ’20s, all did not view it favorably. The Western American featured a column called “Dixie Club Notes” based on activities at the Dixie Club, a hall that could be rented by social groups at 708 Pine Street. Although the column was largely self-serving, one entry does reveal something about West Oakland’s image:

Our state [California] is unique though some people have a dislike for our location of the cabaret it is in a part of the city that some people don’t like… if you visit San Francisco after the show, you want to go to Chinatown. If you go to Paris you want to get in the Latin quarters. I just want to show you that West Oakland is not the worst place on the globe. So let us get together and make Oakland a real city by putting the Dixie Club over [Western American 17 September 1926:2].

Although the fate of the Dixie Club was not learned, clearly West Oakland’s reputation grew to meet the writer’s expectations. The jazz meccas of the East Coast and Midwest—such as Harlem and Chicago—soon had their counterparts in the West. Central Avenue in Los Angeles, the Barbary Coast and later Filmore Street in San Francisco, and—of course—Seventh Street in Oakland were known centers for jazz entertainment and nightlife”

Document from the Oakland Planning Department

From the Oakland Planning Department