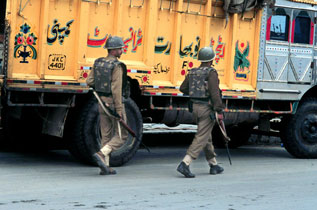 KASHMIR, India, April 9, 2003—In the chill of Kashmir’s lingering winter, gunmen in military uniforms crept into a backwoods village where a dozen Hindu families had bundled up for bed. The masked men banged on doors with rifle butts, corralling as many villagers as they could into the town square — men on one side, women on the other. They removed jewelry, slicing one woman’s ear to recover a gold earring. An hour and a half later, the intruders unloaded a flood of bullets that left more than half this village’s Hindu residents dead.

As morning draped sunlight on Kashmir’s worst massacre in three years, survivors swayed and wailed over 24 corpses lined up in the dirt — 11 men, 11 women and two boys, aged 2 and 3. An old Hindu man slumped under a tree just a few yards from the bodies of his two daughters and two of his three grandkids and broke into a feeble sob. His Muslim neighbor stroked his arm and whispered, “Be patient now.”

But soon after, when Chief Minister Mufti Mohammed Sayeed, the Kashmiri head of state, arrived by helicopter to survey the scene, the grandfather rose to his feet. He gestured sharply at his dead family and bellowed as he paced back and forth, echoing the question everyone in Nadimarg was asking: How could this happen?

Read the rest of the story from Salon.