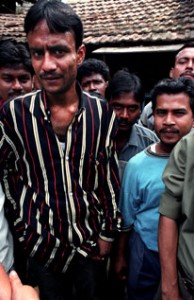 Officially a waiter at a coffee shop near the Bongaon bus depot, Vikram Saha helps transport illegal immigrants across the India-Bangladesh border. Photograph by Mark Murrmann.

BONGAON, West Bengal, March 2003 – Three miles from the border, in this lawless outpost, a man in a cheap shirt emerges from a café in the bus station. He doesn’t look especially menacing; he’s what Americans would call a coyote, a smuggler of humans. Here in Bongaon, they call him a dada, which carries a slightly less pejorative connotation. It effectively means a don.

But lost on the West Bengal gangster are the ostentatious suits and cigars of the Italian-American wiseguys.

“I’m totally invisible. No one will know I’m here,” said Vikram Saha, who “officially” works as a waiter in the corner coffee shop. And, it’s a good thing. The Government’s focus on the border has meant that the business of smuggling has soured. Nowadays, the most active border activity is by agents sending back Bangladeshi migrants.

It’s already noon and Saha hasn’t found a single customer for his side business. Normally he culls the bus stop for the poor and disheveled — people who obviously have arrived to sneak back into Bangladesh and visit family. For a fee of 450 rupees (about $10), Saha will transport them from the bus stop to a safehouse on the border. There, another dada will guide them across into Bangladesh.

Farther down the road, another sort of dada has been fiddling his thumbs.

In the claustrophobic backroom of this three-man-wide money exchange store, Saroj Biswas has been waiting for the government’s firestorm to blow over. Biswas, who is uncommonly tall for the area at about 5’8″, is the A-dog leader of a syndicate that deals in smuggled goods.

“Everything except heroin and gold,” he said, eyeballing the strangers around him. “That’s on principle.”

The number one illegally transported good between India and Bangladesh is cattle. Experts estimate that dadas stampede more than 1.5 million cattle across the border every year.

Business is down, said Biswas; border trade has braked to a standstill. “It’s the political climate,” he said. And then there’s the new assistant commander of the Border Security Force, a “good officer” whom they are lobbying to transfer. 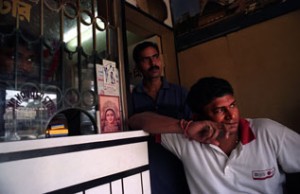 That new assistant is commander Senthil Kumar, stationed at the nearby Petrapole office for about 10 months.

Sitting in his office where it’s hard to ignore the stuffed toy Bengal tiger in the corner, the 26-year-old Kumar echoes Deputy Prime Minister L. K. Advani’s rhetoric to the last word. “Pakistan feels a setback there (in the west). The ISI agents look for a safe passage and where do they find a safe passage? Bangladesh,” he says. However, he acknowledged: “We have not caught any ISI agents but we have lots of reports. We don’t have a direct confrontation with them because they sneak in clandestinely.”

But with so many men and relatively so little an area, it would seem impossible to slip something past the BSF, which boasts about 250,000 members — 20 times bigger than the U.S. Border Patrol. Kumar said he has stationed two BSF agents every few hundred yards, each outfitted with night vision goggles. Behind the line, teams of foot, bike, horse and vehicle patrols provide zone coverage.

However, size never really has seemed to equal potency. In 2001, the BSF apprehended about 11,000 transborder criminals and 8,349 Bangladeshi nationals. The U.S. Border Patrol, with a force of about 10,000, apprehended 1.2 million undocumented immigrants.

So what does he do given Advani’s message? Kumar says he has little choice other than conducting “push-ins.” Push-ins are informal acts of repatriation that usually occur at night, in which BSF agents round up their daily catches and march them through unguarded stretches of the Bangladeshi border. Since February, it has been estimated that the BSF has pushed back 15,000 to 20,000 immigrants. “We try to contact them (BDR agents), but they don’t respond,” Kumar said. “We have a game over here.”

Subrata Nagchowhury and Mark Murrmann contributed to this report.