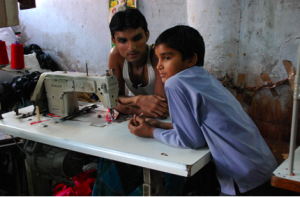 NEW DELHI, Delhi, April 2010—Miraj, 11, works 8 hours a day and spends two hours each day in school getting a remedial education to make up for the years he had spent in a small village school in Bihar state where the teacher never came to class.  He came to Delhi with his 21 year-old brother who is the foreman of the small factory where both work.  Moving Miraj came to Delhi in part, his brother said, to get a better education.  Right now, that’s not happening but the Right To Education Commission that is newly charged with getting Miraj and the 60 million children like him back in school sits less that a mile away in downtown Delhi. For the first time in its history, India has passed a law making education mandatory for all children, regardless of caste, aged 6-14.

Lillian R. Mongeau travelled to village schools and the slums of Delhi to report on this story about the newly awarded right of all Indian children to receive an education.  Her final story is a written piece.