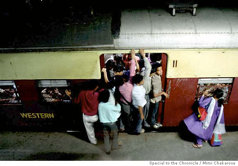 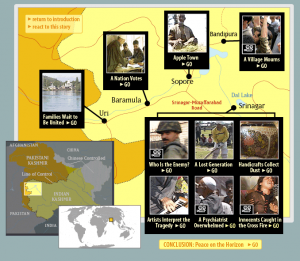 KASHMIR, India, November 2004—Kashmir is a divided land. India controls one part, Pakistan controls the other. It has been this way since 1947. Pakistan and India have fought two wars over this beautiful, tragic highland, and for the past fifteen years, the Indian army in Kashmir has battled a pro-independence movement. For Muslim militants it has become a jihad or holy war.

When we arrived in Kashmir, we saw soldiers everywhere, peering from the tops of balconies and peeking out of bunkers on street corners. There are nearly 600,000 Indian security forces in the Indian-occupied part of Kashmir, home to some 8.5 million people—the highest soldier-to-civilian ratio in the world.

We came here because there is, at long last, talk of peace. India and Pakistan, both nuclear powers, signed a cease-fire agreement in November 2003 and pledged to go forward with twelve “confidence-building” measures. For the first time in fourteen years, the two countries played a cricket match last spring, and it went off peacefully. Now they are proposing the re-opening of Kashmir’s main highway, which is currently blocked at the Line of Control which divides India- and Pakistan-held Kashmir.

We decided to take a road trip as far as we could go on this Srinagar-Muzaffarabad Road — to see what life is like in the legendary valley of Kashmir and to ask people what they thought about the prospects for peace.

See the rest of the story, with interactive map and videos, on Frontline.