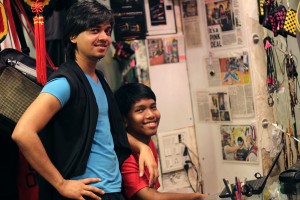 MUMBAI, India, April 2012—After more than a century in the shadows, India’s homosexuals emerge from the closet.

Down the 16th Road, a rainbow flag welcomes you to one such store: D’kloset. Outside, there is a mural of a man pulling another out of a closet. “No, no,” he says. “I’m not coming out.”

D’kloset owner Inder Vhatwar will tell you that is time for gay people in India to step out of the closet that locked them in for more than a century.

MUMBAI, India, April 2012—As a virulent, new drug-resistant tuberculosis strain surfaces in India, the world fears a resurgence of its oldest disease.

Instead of helping her mother with household chores, Sonam S. Yambhare lay quietly on a rusted bed. She was one among dozens of women in Ward 8, a silent room with unpainted concrete walls in Mumbai’s 103-year-old government-run Sewri Tuberculosis Hospital.

There was no medical equipment in sight. Records were filed in rusted metal cabinets. Sometimes, orderlies, or “ward boys” as they are called, carried away the infected mattresses of dead patients. “Everyone is depressed here,” said Mokshada Chandge, a young doctor on her rounds, explaining the silence, a sharp contrast with the ceaseless bedlam of one of the world’s most densely populated cities.