By Andrew Strickler, for The Christian Science Monitor (class of 2005) 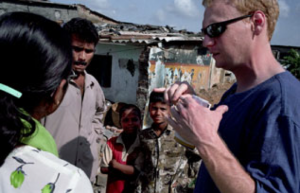 BOMBAY, India, August 4, 2004—At Mumbai Central station in Bombay, a thousand tired passengers disembark from an overnight train. Businessmen with briefcases, barefoot laborers, and wealthy families followed by luggage- toting servants make their way through crowds of waiting passengers seated on the station’s marble floor, toward a swarm of taxis outside.

As they disperse, a group of about 25 young people remains behind. Ranging in age from 10 to 20, they are among the permanent residents of Mumbai Central. For them – and countless other children across India who have no other place to live – the station is much more than a transit point; it is an escape from a troubled home, a meager livelihood, and a veil of protection from the chaotic streets of overcrowded Bombay (Mumbai).

On a sweltering May afternoon, Siraj, who has wavy black hair and the taut muscles of a luggage porter, tells his story as he waits to unload a train that is already six hours late. Nearly a year ago, he hopped a train 1,100 miles away in Calcutta after his mother, overwhelmed by his father’s illness, kicked him out. “I just got on the train and thought I would find work,” he says.

Siraj came to Bombay because that was where the train was headed. He stayed because he had nowhere else to go.

It is difficult to estimate the number of children like Siraj who live in Bombay’s stations; their mobility and the overwhelming number of homeless defy surveys. UNICEF estimated in 1994 – the latest year for which figures are available – that India has 11 million homeless children, with a significant percentage living in urban areas.

An estimated 30 unaccompanied children arrive at the city’s 125 train stations every day, according to Aasara, a nonprofit organization that supports Bombay’s homeless children. They’re attracted by the perception that there must be jobs available in the country’s most prosperous city, and also by the image of glamour that gives Bombay the reputation of being the Los Angeles of India.

Read the rest of the story, published in The Christian Science Monitor