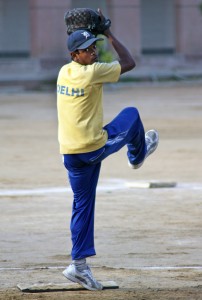 VARANASI, India, April 2012—When Dinesh Patel was a teenager, he figured that if he were to make a name for himself, he would do it with his arm. Growing up outside Varanasi, India’s holiest and oldest city, he could throw with more might than the other boys in his village, and at 15 years old he went off to a sports school to cultivate this natural gift. Within a few years, Patel hoped, he’d be launching javelins for India’s Olympic team.

He was right about his arm. He just didn’t realize it would make him an ambassador for a sport he’d never heard of.

Now 23, Patel is four years removed from being introduced to baseball by the inaugural Million Dollar Arm contest, a reality-show talent search for potential baseball players in the world’s second-most populated country. And after an impressive showing in the contest afforded him a chance to pitch professionally in the United States, Patel is trying to make a future for himself in baseball. In India.